Hannah Dines, a 19 year old Scottish RaceRunner with cerebal palsy,  writes about how  the RaceRunner made her dream of running come true. 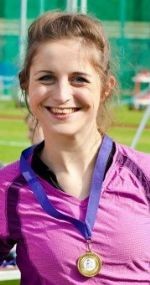 The warm breeze flew around me, the soft green grass whispered upon my bare feet, the sun glanced off my skin; I was going so fast the elements could only grasp and never hold. I was running over a prairie, so large there were no edges, so empty there could only be me.

This is a recurring dream of mine, from as long ago as I can remember. I have no idea what it meant to me in my early childhood, only that it was one of my favourite make-believe places. I think it must have epitomized freedom to me – from dreary, wintery Glasgow, from the concrete of the city, from the reality of my disability.

From a very early age cerebral palsy (irreparable damage to a particular part of my brain tissue as a new-born) left me with reduced motor output, poor balance, high muscle tone and slow malformation of leg and foot soft tissues. This was then and will always continue to be, fine by me. I do not have any paralysis, I have all my senses and most importantly I can think for myself.

Yet as a child at school, careering around the playground I was always restricted by the teachers: ‘too fast’ and ‘too much danger’. Furthermore I was outraged that I had to be poked and stretched by strange physiotherapists in nursery when I could have been making animals out of play-doh and was distraught to have a ‘helper’ in primary school to slowly take my shoes on and off when everyone else did theirs by themselves.

The world never responded to my cerebral palsy as fine. It was only later, that I realised there were things other people could do that I could not. I finally came to the conclusion that I must have a disability.

Running was one of the most prominent things that got to me. I knew moving for me was a nuisance; I disliked it and avoided it at all costs. When I saw my class-mates running though, they looked like it was the best thing in the world. Their expressions enchanted me- determination, exertion, joy. One movement flowed into another, pushing their bodies to the limit, faster than anything. For a while I believed I had that too but somewhere inside I knew wobbly and disjointed was just never going to give me that feeling.

Sports days were the worst after that. We would all line up, knock kneed kid after knock-kneed kid, the one at the end hanging onto her Kaye-walker, raring to go. I would get a head-start and hurtle off. Then, puzzled, I was watching the backs of my friends disappear in the distance. Willing my body, I jolted onwards. No matter how much I strained, I could not catch up. I was invariably left alone with all the parents who felt it was their duty to guiltily patronize me- ‘Come on, you can do it Hannah’ which just made the contradictory fact plainer to see. All the sports days of my primary school played out like this: false encouragement, failure, frustration. I vowed I would never race again.

This held true throughout various operations, orthotic treatments and physiotherapy which enabled me to learn to walk independently of my Kaye-walker. This was a huge leap forward for me and one I wish I had taken greater advantage of. Movement remained only a necessity.

It was the summer after my first year at University I was casually flicking through a magazine. It was not just any magazine. It was magazine that would change my life. It was the photo which drew me in. A face. An expression. It took me back to my early child-hood and the children running about in the playground- full of elation and the delight of exercising. His legs were free, his torso tilted by a small chest plate his arms outstretched to meet handle bars. What I was looking at was a wonderfully designed piece of engineering but what reached me was that this boy was… running.

What began then was a fast-track journey that really puts the fast into the track. With massive encouragement, guidance, time and effort from the heads of Ace Racerunners and a coach from Red Star Athletics, I was sitting on a RaceRunner within a week. I felt so welcomed and so at home. In fact it was the friendly faces and pats on the back and brilliant community spirit which got me through my first time on a RaceRunner. Anyone who firs experiences being supported by a saddle whilst trying to move their pelvis around it has the feeling they are being given several unforgiving wedgies- luckily this diminishes with time.

Now racing is the best thing in the world. Every time I stand at the starting line the glimmer I had felt, nudging under the surface seems to expand inside me. It urges me on, pushing me to achieve. I feel sure the brightness inside me is hope.

The breeze flew around me, the ground was gliding beneath my feet, the sun glanced off my skin; I was going so fast none of the elements could hold me back. I was running.

Sport in its definition is the human need to experiment with and stretch the limit of motor function. Cerebral palsy is its exact antithesis. It destroys motor function, balance, ability to weight bear, direct oneself and coordinate movement.

RaceRunning is freedom from all of those things. The Racerunner holds you up just enough that you can hold yourself up. Its chest plate gives you back your balance, its wheels start you moving, and its handlebars give you the power of direction. It takes away your disability replacing it only with ability. It made my dream a reality.

For the nine months RaceRunning has been part of my life; it has improved it astronomically. RaceRunning not only showed me my own aptitude to do sport but also allowed me to find talent in other areas of my life. I am happy and healthy in mind and body -excelling within my university, with an everlasting stamina, readily available stress relief and frequent endorphins- I have not, slowed-down nor looked back since. There are still challenges but none of these seem insurmountable any more, combined with my determination and the freedom that the RaceRunner gives me, I am unstoppable.

The world of RaceRunning is itself a limitless prairie: a body of invaluable people, who like the RaceRunner itself, aim to turn disability into ability. The question is, did Connie Hansen realise, when engineering her masterpiece, that she was not only creating a sport but was unleashing Racerunners, fuelled by hope, with an intent to widen the landscape of disability sport? We are running forward, running for progress, running for freedom, a RaceRunning Revolution.

See also this two-part video-interview with Hannah, her mom and her university teacher.