Warning: "continue" targeting switch is equivalent to "break". Did you mean to use "continue 2"? in /var/www/by-conniehansen.com/public_html/wp-content/plugins/seo-ultimate/modules/class.su-module.php on line 1195
 Britt from Denmark has a goal of doing 100 marathons on her RaceRunner! Ava and Andrew completed a Triathlon in USA! | By CONNIEHANSEN

Britt from Denmark has a goal of doing 100 marathons on her RaceRunner! Ava and Andrew completed a Triathlon in USA!

Britt from Denmark is doing marathons!

Britt Drud Sørensen belongs to the group of RaceRunners who are able to walk and run shorter distances. But risk to stumble over her own feet, when she get the slightest tired. Therefore the RaceRunner is a wise choice for long and middle distances. In fact marathons are her speciality. In in 3½ year completed 54 of the 100 marathons she is aiming to do. The goal is to complete 100 before July 2020, and so far she has made it seem surely realistic. Britt trains in a local running club in Kalundborg where she lives. Sometimes she takes her CROSS RUNNER in the back of her car and go to a race and other times she takes the train – as Britt does not have a driver’s licence. She manage pretty much by herself to sign up for the races and do everything around number pick-up and the start also! How? – By good planning!

Training with and competing alongside other runners she finds quite nice and practical. ” It is nice when other runners comes over and ask – how are you doing- how many marathons have you nailed by now?”, she says.

“However it would be great, if we were a lot more doing road races. Bo Bojsen, high amputated on the one side, uses the RaceRunner in triathlons, there is a few doing road races in Jylland (Vestern Denmark, edit) and then Rie on Fyn also likes to train and compete on the road”.

“I hope, we in the coming season, can put more focus on how fun and fine it is to be part of the recreational running community and find good races and event to do together”.

Britt also did an interview in danish on RaceRunning.dk where she explains how and why she does marathons, to read more about Britt click here (The article is in Danish)

Two American teenagers Andrew Donohue and Ava Hardy did a sprint triathlon, completing the running distance on their PETRA RaceRunners. 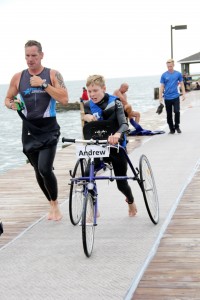 “The RaceRunner and Tret are amazing pieces of equipment and are vital to the success of our triathletes. These devices allow them to fully participate in a triathlon. They are swimming with their legs (when weather permits the use of the swimming boards), they are pedaling with their legs and power, and they are running with their legs and strength. They experience all parts of the triathlon, including the brick legs that happen after a bike- to- run transition. Being pulled/pushed in adaptive equipment was not an option for these two… they wanted to be full participants! They earned their new titles of triathletes,” says Jaime Toner 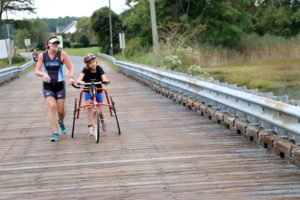 “Being able to participate in Athletes Serving Athletes with her RaceRunner has been one of the major reasons for Ava’s improving self-confidence (she struggles with an anxiety disorder). Also, RaceRunning has been the foundation of a wonderful friendship she is developing with Andrew, says Avas mom, Lisa Hardy, and continues:

“I am so grateful for all these positive experiences and for all that you do. I know that when Ava is out there racing, she is teaching people that a physical disability does not define whom a person is.”