Connie Hansen tells the story of the creation of the revolutionary running bike, Petra Frame Runner. And of the development of the international para-sport Frame Running.

The Danish para-athlete Mansoor Siddiqi was competing in track and road race in his everyday wheelchair pushed by feet. Mansoor,, who has Cerebral Palsy, wanted a safer chair that he could steer without having to brake with the feet and to be more powerful. I suggested him to stand up, turn around forward and tilt a little to have a better stride. It seemed straight forward and naturally to do. But it turned out to by the start of a revolution in CP sport and the organization of CPISRA (Cerebral Palsy Sport and Recreation Association).

I made some drawings and my father, a retired blacksmith made the first Petra in his garage out of a trashed bike, an old office chair and the pipe of a vacuum cleaner. However, it worked surprisingly well. Mansoor participated in a 5 km race in central Copenhagen the same day he got it, along with runners and wheelchair racers. And did not finish last at all!

Both Mansoor and I were coaching juniors in athletic clubs and we brought the Running bikes for the kids to try. They were excited and we organized small competitions. More prototypes was made and more young people wanted to run like Mansoor. Soon I had a growing business and started focusing on developing and adjusting the Petra for different users.

Mansoor took his PETRA Running bike to the Robin Hood Games, I think it was in 1991. It was a CP event hosted by CPISRA. It was an eye opener to many people – they hardly knew what to think! He was much faster than the others pushing backwards and was moving more like the standing runners. They would not let him officially compete against the backwards foot pushers. We realized that running with a running bike had to become a new discipline in itself. 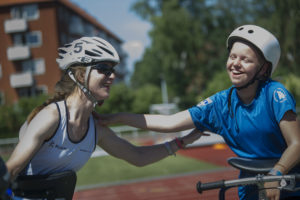 Around the same time Mansoor and I started to coach juniors in athletic clubs and we brought the running bikes for the kids to try. They were excited and we organized small competitions. More prototypes were made and more young people wanted to run like Mansoor. In the following years we sent young teams of runners to the Robin Hood Games. The Danish runners made an amazing fantastic impression. Slowly more athletes and countries became involved in the sport.

CPISRA became the governing organization for RaceRunning. But the political and structural trends in international disability sport made it hard to promote anew disciplines without money and able bodied sports organizations behind us. However with Mansoor’s persistence and commitment to make promotion, events and a website community platform, RaceRunning had come to stay and to grow!

It was needed to define rules and classification systems, make videos on training and other instruction material and I have participated as much as I have been able to – to overcome the hurdles as smooth as possible. Mansoor has worked tireless and committed to attract athletes, parents, money, make workshops and presentations, and lobby in the sports organizations – all to create a national and international structure for the sport to grow from.

For me personally the development also meant that it made good sense to try and produce and sell running bikes, even though it was a very small business for many years. Later I started to make other kinds of walkers for the same groups that uses the PETRA. 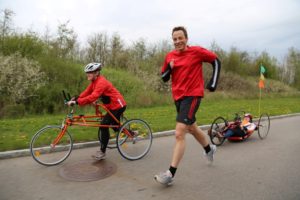 In the beginning most of the runners were young teenagers with CP, but today there are runners of all ages, from children to seniors, and with a wide range of disabilities, including arthritis, spina bifida and amputations. Some use the running bike for recreational walks and runs, others for competing in track and road races.

However, the two most fantastic things is that it is very easy to train able bodied runners and people using RaceRunners together, using a time structured program. And that many people with severe disabilities, who are not able to walk or run by themselves,  can participate in even long road races, half and full marathons.

In December 2011 RaceRunning was on the program at the IWAS (International Wheelchair & Amputee Sports Federation Games) in the Middle East for the first time. It was a great success, not only by means of new world records but also because of the interest from the other disability groups and from the athletic representatives of nations present at the games.

In the summer of 2012, some 10 athletes from Denmark, Scotland, Portugal and Hungary participated in RaceRunning at the IPC Junior Games in Brno, running 100 m, 400 m and 800 m distances. Again RaceRunning got the attention of new nations, here among some young Russian boccia players who already the following year came to Denmark for the RaceRunning Camp and to get their own RaceRunner. Benefitting from the know-how and training at the camp they learned to run and could successfully compete at the end of the week with the other athletes.

The growth of athletes and countries involved, and the performance level and appearance of the athletes at these international events have finally attracted the attention of IPC athletics section and IPC in general. Formal negotiates have started in 2014 between IPC and CPISRA/RaceRunning committee on how to include RaceRunning into the different levels of IPC events. So there is a good chance to see RaceRunning at IPC athletics regional championships and world championships in near future and at the Paralympics coming after Rio 2016. 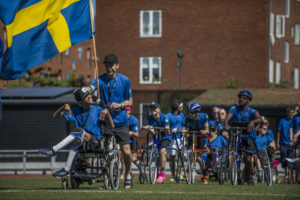 RaceRunning around the world

Today, there are active RaceRunners in around 15 countries around the world. Among the leading nations are Denmark, Sweden, Scotland, Brazil and Portugal.

In Denmark, Sweden and Scotland RaceRunning is organized mainly in a growing number of voluntary Sports clubs.  The clubs are often initiated and run by parents to some of the young runners.

In Portugal, Brazil and Hungary the sport seems more linked to special needs schools and therapeutic institutions.  In other nations there are private initiatives who are trying to get support from sports organizations and public authorities.

It seems very important for the growth and resilience of the RaceRuunning movement in the individual countries, to have family members to support the athletes, that the sport is a part of national and local disability sport movements, and that the sport has relations to able bodied activities. But also good links to professionals in special education and rehabilitation helps get awareness to the many positive “side effects” of RaceRunning. 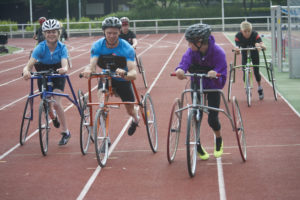 Around 1995 Mansoor and parents to the runners started to make a one week RaceRunning summer camp. It has grown in size and number of nations participating and the competitions have become official CPISRA championships some of the years. In 2014 68 athletes from 11 nations participated.

Now the flag ship of RaceRunning, the International RaceRunners Camp & Cup, is held annually in July in Copenhagen. It attracts and inspires people from many countries as far away as Brazil and Tunisia. It is largely organized by Mansoor Siddiqi and the Danish RaceRunning Support Union. It has grown in size, ambitions and visions to be a generator and transmitter of information, and education to the future growth of RaceRunning. In 2014 nearly 150 athletes and staff participated.

The week consists of training and competition, education of coaches and technical officials, social activities, cultural events and ends with a great party. Some years it has a kid’s camp and an adult camp.

The organizing group welcomes volunteers, and financial as well as natural support that will help them turn ideas into reality. Read more and find contact on RaceRunning.dk.